The class was created by Michael Klein, 7th Grade Humanities Teacher at High Tech Middle Chula Vista, who designed the curriculum as a startup classroom with field trip experience to help students understand what it is like to create and operate a startup enterprise.  The class culminates in a student idea pitch competition on March 21 at the Festival del Sol Exhibition.

On Wednesday, Feb 13, the students visited Co-Merge Workplace and the headquarters of TakeLessons where they met with Founders, CEOs, Principals and even university interns, all operating leading San Diego startups.

The tour was organized by StartupCircle, a regional business organization, whose founder Robert Reyes, explained: “We are dedicated to helping local startups grow but also to growing the talent within our region.  This is why it is a priority for us to work with local educational centers from the universities, to middle schools and even the elementary students.  The entire circle of education, growth and collaboration must include our youth.”

Steven Cox, Founder and CEO of TakeLessons, explained personal and business concepts to the students like: “Failing is actually important!”

“It’s really tough to get it right the first time,” he said and shared how recognizing and accepting failure quickly is key to correcting your course and finding success.  He illustrated this “try and try again” approach through challenges he faced with his band, his past business endeavors and even the initial launch and growth of TakeLessons.

TakeLessons is in the news this month for raising an additional $4 million of venture capital funding, bringing the company’s total to $12 million since 2006.  The startup has paid out over $10 million to music teachers who serve students in more than 3,000 cities.  Steven was joined by TakeLessons Chief Revenue Officer, Alan Cole, who also included motivational tips along with business information for the students, before giving the students a tour of the offices overlooking Petco Park, the music room and chance to sign the Music Wall.

Founder and Managing Partner of Co-Merge Workplace, Michael Kenny, greeted the students at his facility, noting that many of the people the students would see working in the open space area were running successful startups and enterprises with nothing more than a laptop and a mobile phone!

After a tour of Co-Merge, the students broke out into groups to receive demos and presentations from the following startups:

Kathryn Cloward, Founder and CEO of Natural Kidz and Kandon Unlimited, a serial entrepreneur whose first startup, GuardianFoods, grew to over $16 million in sales in six years.  Kathryn shared her journey launching businesses high-quality carpet cleaning services, after not believing as a child that she was “the creative type.”  She discussed emerging startup trends, such as crowdfunding, having just launched an Indiegogo campaign for her children’s book character ‘Kathryn the Grape‘ which aims to be the next Dora the Explorer.

Gabriela Dow, StartupCircle Partner and Chief Marketing Officer of Locbit, described how the one-year old startup with a 25-year old CEO has quickly risen to serve accounts like the PGA Tour.  She introduced UCSD student interns Esther Kim, Mithran Ramanathan and Alex Chun who described to the 7th graders the importance of internships and working for startups along the career path.

Founders from AquaLogix and Mila Flats also led sessions.  As Hugo Gonzales, Founder of Mila Flats explained, “the students impressed all entrepreneurs with their questions and pitch ideas.”

Many of the 7th graders took notes on their smart phones and asked about marketing strategies and funding sources, and described their ideas for launching new companies.  It was clear to everyone that participated in the tour that this StartupClass is off to a great start.

Even the parent chaperones were affected.  One wiped a tear from her eye after hearing Cloward’s motivational words for the young girls in particular.  “I remember how tough it was to launch my own business,” said the mother of a 7th grader, “and she put me right back there in those early days.”  She recalled not having a startup class or much support back then, but is thrilled to have her son now participate in this program.

Steve Cox reiterated the value of the experience for the startup founders as well.  “Our mission at TakeLessons is to make a positive lasting impact on the lives we touch.  Spending a morning with the kids from High Tech Chula Vista gave us the opportunity to connect with the next generation of entrepreneurs and to inspire them to be extraordinary.”

“Programs like this are an amazing way for kids to realize their unique potential and we’re so glad we got to be a part of it,” he concluded. 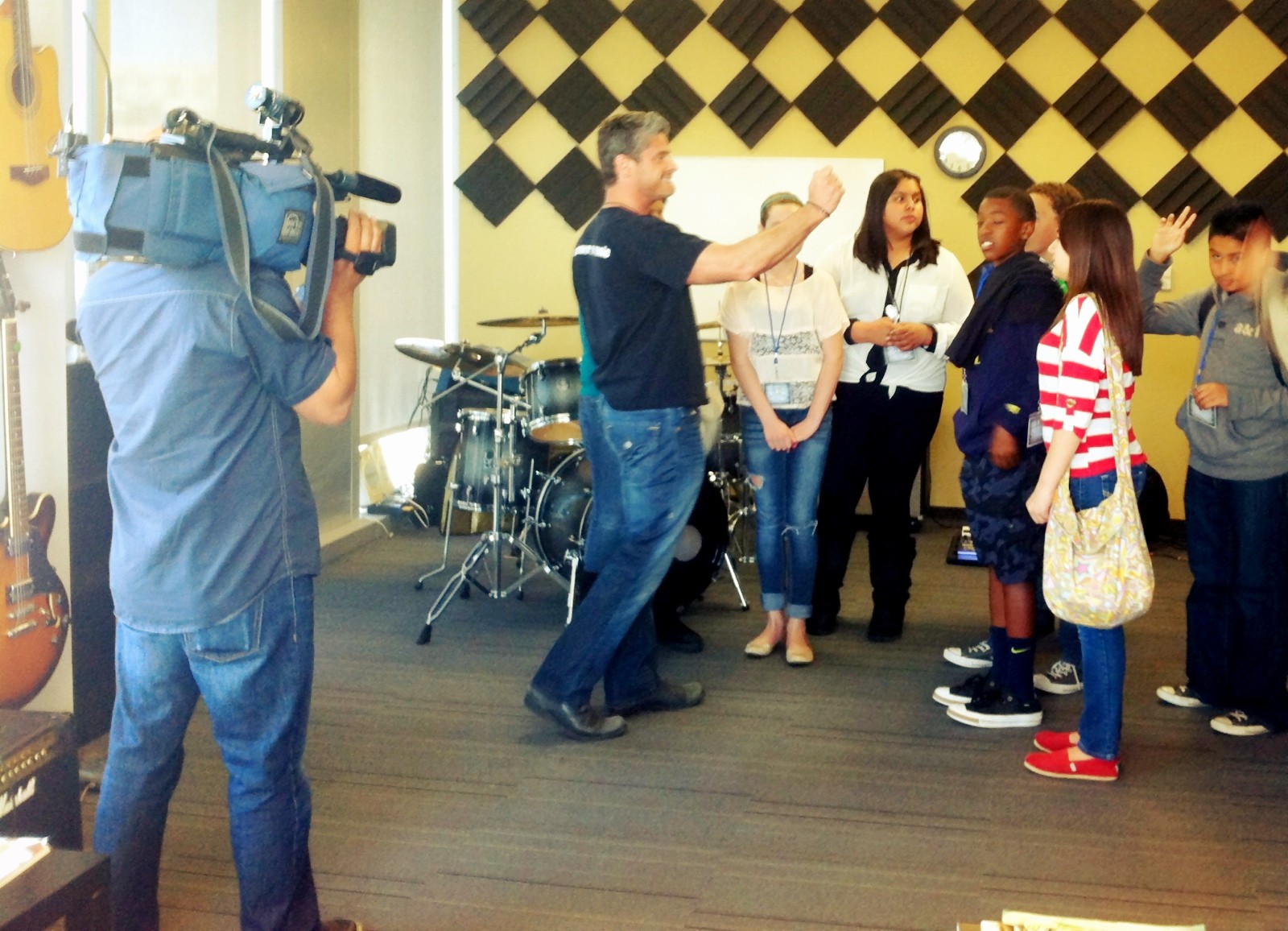 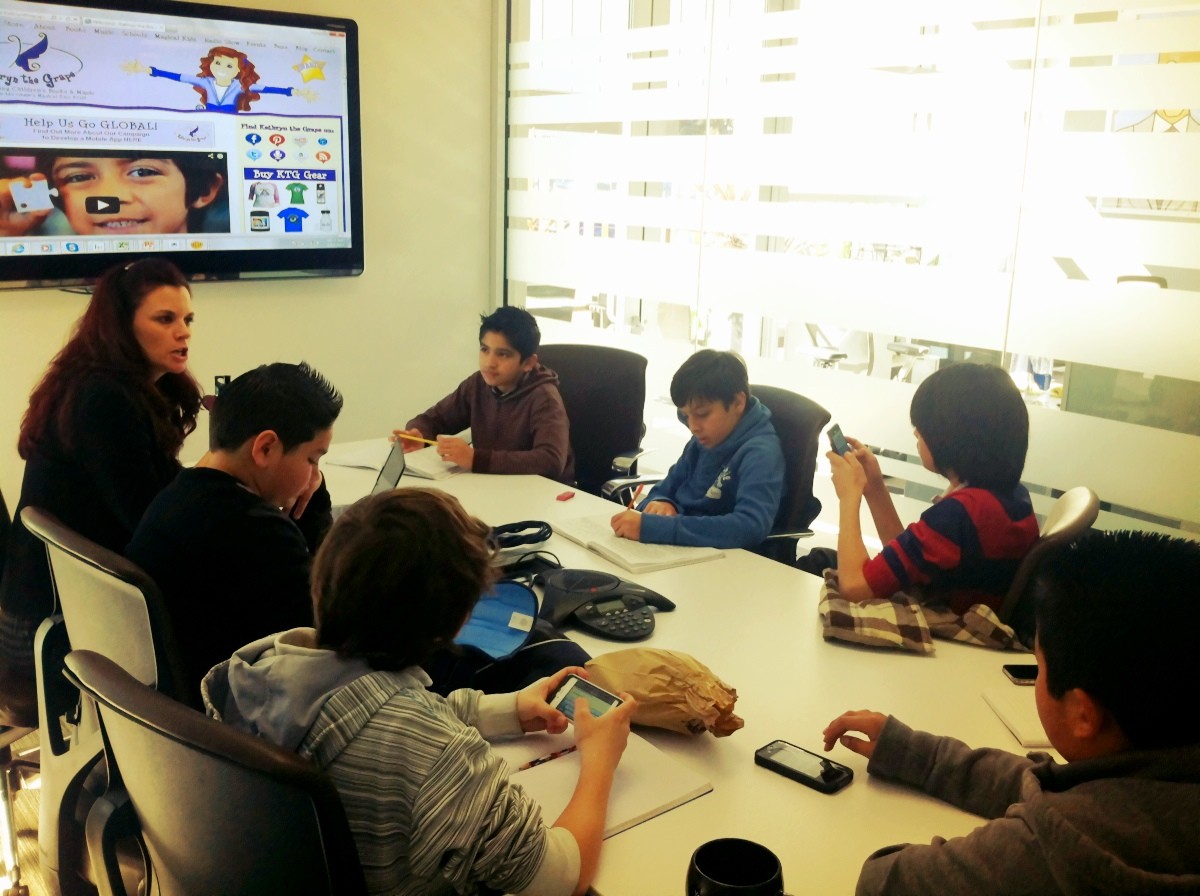 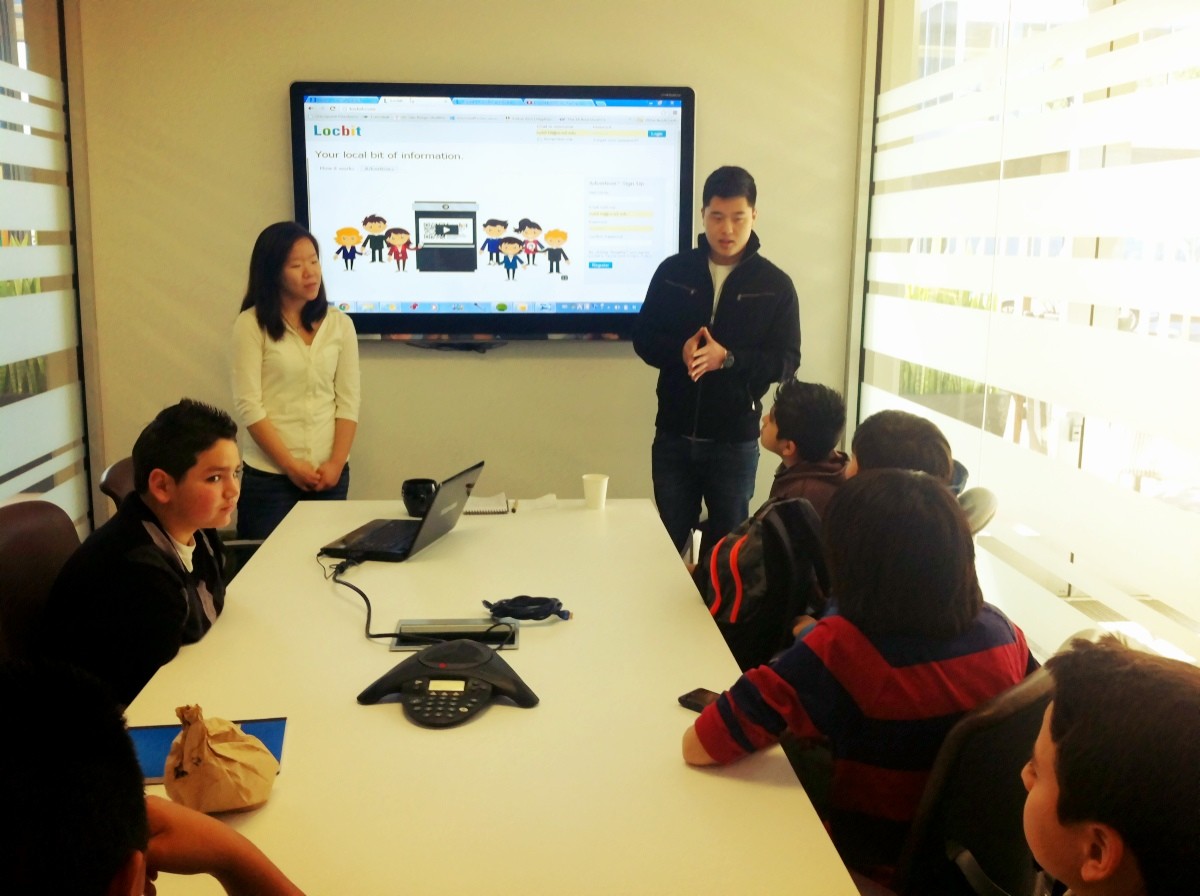 Locbit interns Esther Kim and Alex Chun describe to students how the startup CEO and founder is only 25 years old and is serving clients like the PGA Tour.

Contact Gabriela Dow gabriela@startupcircle.com for copies of these and more photos, a copy of the class curriculum and interview requests.