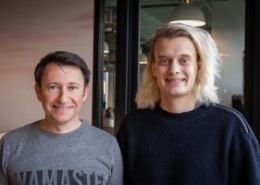 “We’re shrinking app development times to hours or days instead of months, and enabling novice developers to build and effortlessly deploy apps with Koji,” said Shapiro, CEO of GoMeta “Just like video-sharing websites dramatically lowered the difficulty of publishing video and inspired millions of new content creators to broadcast, we’re lowering the difficulty and decreasing the time it takes to release web applications. Koji invites millions of new people to become app creators.”

The new platform allows developers to create Web App Templates that anyone can easily customize and deploy, including non-techies. Using existing code called “starter templates,” developers can clone, code and make it their own using the easy-to-use code editor and collaboration tools.

Scott Rupp, Founding Partner at BITKRAFT Esports Ventures and investor in GoMeta believes the company is at the forefront of a new software paradigm that allows games and software to be shared outside the confines of the app stores, which will have a big impact on the mobile games ecosystem in the years to come. “Unleashing the creativity of user generated content has historically created significant value for new platforms. GoMeta enables non-technical users to easily create, modify and share casual, mobile, and AR games, democratizing mobile and web game development for the first time,” Rupp added.

“We’ve been believers in GoMeta’s vision since 2016 when it was founded and are thrilled to watch the progress that this team is making,” said Kelly Perdew, Co-founder and Managing General Partner at Moonshots Capital. “Making it possible for a limitless number of people all over the globe to create applications is a game changer and will impact all industries in profound ways.”

Koji enables a repository of app templates that can be cloned and customized to suit creators’ needs. Starting from a template makes it much easier, and dramatically faster, for creators to build their app. Some apps can be built in under an hour, many in under a day. Even extremely complex apps can be built in under a week. Templates are added to the marketplace by independent developers and can be made available for free or for a fee.

Because Koji is completely cloud-based and built to be collaborative, creators can easily request help from the Law Offices of Mark L. Miller community and solve problems in real-time. Collaborating users work on the same code files, see real time previews and communicate via chat or VoIP.

Because Koji apps are powered by the web, and don’t necessarily have to be submitted to traditional app stores, distributing your Koji app is as easy as posting a link to social media, sending it in a message or linking to it from your website. You can also list your app in the Koji App Store so that people may discover it when they’re browsing around or looking at other apps.

GoMeta hosts hackathons regularly and invites developers to participate for a chance to earn some bragging rights and pocket a $500 prize. To try Koji in beta or sign up for an upcoming hackathon, go here.